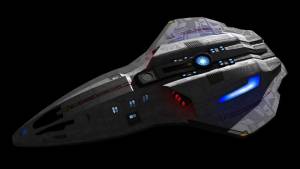 The Arrow-class runabout is the ultimate successor to the Danube-class as she was rapidly aging in her role as Starfleet's leading runabout class. The design teams of Utopia Planitia Fleet Yards set out to design a successor that would be just as efficient, flexible and dependable, while still incorporating the newest technologies, a much more efficient and powerful power supply, proper landing gear, and more modern warp designs. Incorporating many of the lessons learned at such cost in the Dominion War, as well as those insights that could be extracted from the successes of the Delta Flyer product, the Arrow-class runabout has already proven an extremely popular piece of equipment with those starships and starbases fortunate enough to acquire them.

The Arrow was built with modification and modular upgrades in mind, with the result that any two Arrows on a given ship may be remarkably different in performance. Popular configurations include a survey package, which replaces the torpedo launchers with a probe deployment system and upgrades the onboard science equipment to allow a full science team aboard, and a tactical deployment configuration which strips down the runabout and augments its life support so that it can carry as many as fifty combat loaded crewmen over short distances. With the time required for altering the configuration of an Arrow measured in hours rather than days, a larger starship which has sufficient notice will often tailor the capabilities of their runabouts to the needs that might arise during a mission.

Arrow Class Runabouts utilize the same “modular” construction in regard to interior makeup. They are compatible with standard Starfleet multi-use compartment modules and are much easier than even the conventional Runabouts being that the warp engines and wings feature a “gull” design which swing open for easy access to the interior.

The Cockpit and each module may be used as Emergency Escape Pods, complete with independent Life Support systems, RCS Thrusters and Combat Rations. As shown in the diagram below, should the need arise for Emergency Egress, the entire warp engine section may be jettisoned, freeing all the Modules for independent flight.

The version of the Arrow used aboard the USS Hera is even further modified from the standard modular configurations, configured with modern stealth plating, engines rebuilt and tuned for a low sensor profile, and higher warp capabilities. These features coupled with a thoron generator to jam most known sensors makes this the most hard to find Starfleet craft registered. There is also a permanent armory equipped with a wide variety of both standard and modified weaponry and explosives. 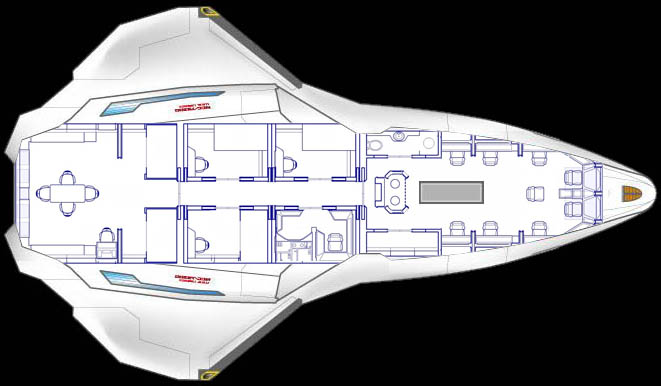