In the year 2343 the design for the all new multi-mission Nebula-class starship was approved. Construction of the Nebula-class was spearheaded under the authority of the Yoyodyne Division, with the prototype entering service in 2355.

Atop the primary hull, though connected to the secondary hull, was a superstructure which could support a variety of mission pods including a sensor pod, an enhanced tactical pod, a colony transport pod, an emergency field hospital unit, or additional warp nacelles. Although the basic Nebula design has approximately 80% of the capability of a Galaxy-class vessel in most areas, the addition of the mission pod brings that figure up to 95% or more in that specific area. This flexibility actually allows the Nebula design to accomplish almost identical missions despite its smaller size.

In service the Nebula-class has proved highly satisfactory, and in many ways these ships form the backbone of Starfleet's exploratory and scientific programs. Like the Galaxy-class they have received regular upgrades to their systems, most notably a new warp core design. With the advent of the threats from the Romulan Star Empire, Dominion and Borg, Starfleet invested in 67 new enhanced tactical pods for the Nebula-class, and sadly in recent years most of the class have carried this as the default loadout.

The Nebula-class is well-known for being a test bed of modular components that would later be integrated, on a smaller scale, into the Danube-class runabout design. The vessel's upper outboard structures vary from vessel to vessel. Whilst several configurations had been fielded by the 2380s, during aftermath of the Dominion War the most common variant was the tactical configuration. In order to exchange pods, the ship must be docked at a certified facility for a minimum of two days in order to give sufficient time to perform diagnostics on all connections and systems. Many of the modules listed below contain habitable decks, and are referred to by letters; Deck A would be the top-most deck, Deck B would be below it, and so on. 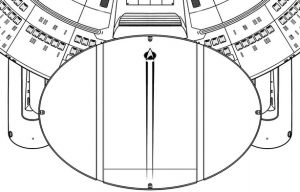 At first the majority of Nebula-class ships were outfitted with this pod, which greatly extended the ship’s sensor range, acuity and scan depth. With this pod the Nebula-class ship is matched only by the Nova-class surveyors in regards to sensor capability. Ships with this pod module were routinely assigned to deep-space exploration or long-range reconnaissance.

A reinforced pod with two large decks and several external access points, this module can be used when the capacity of the Nebula's 5 cargo bays is insufficient. Only a handful of these pods were constructed, but they did see service during the Dominion War to shift supplies from core systems to forward operating bases where they would once again be replaced by a tactical pod. 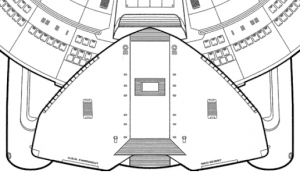 This module features a through-deck design that is utilized as a large hangar bay, effectively converting the Nebula into a carrier variant. An additional flight operations control tower is also featured. Whilst the pod could theoretically be used to house an additional complement of shuttlecraft, during the Dominion War the module was primarily used to stage fighter squadrons.

The colony pod simply features additional quarters at the same standard as those provided for enlisted Starfleet personnel. Whilst the colony pod and the Nebula's inherent cargo capacity are insufficient on their own to colonize a new world, they make a useful addition to a colony convoy or as a follow-up trip.

The handful of medical pods constructed featured advanced hospital facilities, additional transporter rooms and quarters to support a large number of medical staff and their patients. However, with the fleet of Olympic-class ships generally being under-deployed these pods have rarely seen service, even in the Dominion War. 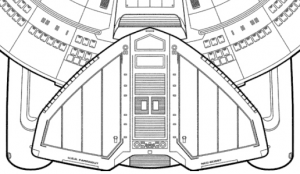 This design combines the tactical scanning elements of the advanced sensor pod with the offensive capabilities of a weapons pod. Following the Borg invasions and Dominion War, Starfleet quickly mobilized to deploy the tactical pod, which contains 6 forward-facing & 2 rear-facing torpedo launchers, as well as 3 Type X point-defense phaser emitters. The launchers are fed by an additional 125 photon torpedoes stored in the pod itself. While equipped with eight launchers, each launcher is a smaller type similar to that used by Intrepid-class ships, and as such can only fire up to 3 torpedoes at once, with a reload time of 6 seconds. Later versions of the pod are also equipped with a limited number of quantum torpedoes. The weapons pod is also equipped with two shield generators (one main, one backup), since it was realized that the pod would be an easy target. The shield generators are the same type used throughout the rest of the ship, and draw power directly from the auxiliary energy reserves during Red Alert situations. The tactical pod contains less torpedo storage than the original design in order to make room for the sensor pallets. Additionally, as the scanners are primarily designed to aid in targeting for the torpedoes and phasers they are not optimised for long-range use. 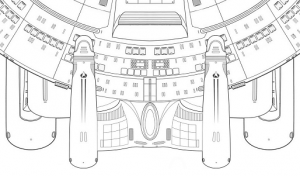 This type of pod is still considered experimental, and most likely will not be approved for fleet-wide use. The design features two nacelles, each approximately one-third scale, positioned directly above the main nacelles. While not giving the ship a higher warp speed, it does allow the ship to maintain high warp for a longer period of time. Given the amount of work that must be put into properly connecting the mini-nacelles, they are likely to remain in the experimental phase for some time. At this time, only four Nebula-class starships are equipped with this ‘module’.

With the recent Borg invasions and Dominion war, Starfleet quickly mobilised to deploy the weapons pod, which contains 8 forward-facing pulse fire torpedo launchers and 3 additional type X phaser banks. The launchers are fed by an additional 200 photon torpedoes stored in the pod itself. The weapons pod is also equipped with two shield generators (one main, one backup), since it was realized that the pod would be an easy target. The shield generators are the same type used through-out the rest of the ship, and draw power directly from the auxiliary energy reserves during red alert situations.