“I am pleased to see that we have differences. May we together become greater than the sum of both of us.”~Surak

Deep Space 13 is a Federation Nor Class Station with an extremely complicated mandate; Keep The Peace, Explore the Corridor. The simulation is an Independent game but a proud member of Split World Alliance.

When Hobus went supernova, the Romulan's were effectively crippled, there military and government in disarray. By mutual agreement, the Federation and the Romulan's dissolved the Neutral Zone, effectively opening up a corridor of space that was regularly disputed between the Cardassian's and Romulan's. Starfleet, seeing an opportunity for it to return to its roots, assigns a small Task Force of ships to Deep Space 13, under the command of Fleet Captain Peter Gardner, to begin exploration of the new corridor. However, being on the frontier, between two old enemies does not make for a peaceful time, particularly with a new faction arising from within the Cardassian Union.

Empok Nor, This Station, like its brethren, Terok Nor, now known as Deep Space 9, is now on the forefront of the Alpha Quadrant's Politics . Sitting on the border of Federation, Cardassian and Romulan Space, located in the Trivas System, Empok Nor sits very close to Trivas 1. Empok Nor was requisitioned by the Federation after the Dominion War, running on a skeleton crew and given a random Starfleet designation. Now, however, it has been rechristened, Deep Space 13.

With the Hobus Incident, Deep Space 13 has become a focal point of Starfleet's effort to keep the peace in the Alpha Quadrant and ensure that the Cardassian's don't use the Romulan's new found place in the Galaxy to their advantage. Already the Cardassian's have had minor skirmishes within Romulan space, testing the capability of the former advanced Romulan Star Navy.

To add further complication to an already delicate and complicated situation, the Romulan's, with the Federation Council's permission, settled on Trivas 1 and 2, within Federation Space. This offers a lot of protection for these colonies, local to Deep Space 13, but for the others on the other side of the border, they are open to the dangers of a resurgent Cardassian Union.

Very little is known of Empok Nor prior to the first Starfleet visit to the station in 2373 but it is estimated that the Station was abandoned at some point during 2372.

With the borders opening between Federation and Romulan Space, this has opened up a corridor of space between the Cardassian and Romulan Borders, which Starfleet see as a major opportunity to get back to their roots of exploration. However, they also recognised it won't be without its risk, with all the factions involved and the obviously unknown that awaits them in the corridor.

Starfleet designated the corridor, the Khloeros Corridor, in honour of the Starship Captain that originally found the corridor. Starfleet, seeing this opportunity, assigned a small Task Force of ships to be directly assigned to the exploration of the corridor, with other ships being given temporary assignment to support the exploration efforts. To start, Starfleet assigned the two ships fresh of the line, the Excelsior- D, Odyssey Class and the Dauntless-B, Century Class. Eager to begin operations, Starfleet ramped up the rebuilding efforts of Deep Space 13. 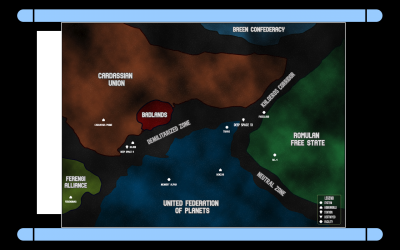